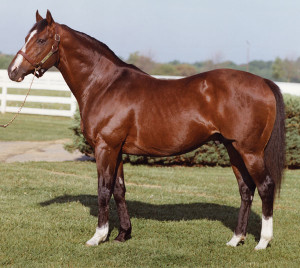 A bay stallion, Northern Dancer was sired by Nearctic through the mare Natalma, whose sire was Native Dancer. Northern Dancer’s grandsire was the English-based horse Nearco, two-time British Isles Sire of the Year. In 1952, Edward P. Taylor, Canadian business magnate and owner of Windfields Farm, attended the December sale at Newmarket, England, where he purchased the Irish dam Lady Angela, a daughter of six-time British Isles Sire of the Year Hyperion. In 1953, Taylor had Lady Angela bred to Nearco before bringing her to his farm in Canada, where she foaled Nearctic in early 1954. Nearctic was Canadian Horse of the Year in 1958, a feat that Northern Dancer would match in 1964.

Despite his strong pedigree, Northern Dancer was a diminutive horse and did not find a buyer at his $25,000 reserve price at the yearling sales. As a result, Northern Dancer stayed in the Windfields Farm racing stable—an inauspicious start to a racing dynasty.

Northern Dancer stood at stud at Taylor’s Windfields Farm in Oshawa, Ontario, until 1969, when he was moved to Windfields’ Maryland farm, where he remained until his death. He was the most successful 20th-century Thoroughbred sire. His offspring earned more money and won more major stakes races than those of any other sire, including North American, Japanese, Australian, and European champions, until the 1990s era of shuttle stallions. He sired 147 stakes winners, including Nijinsky, winner of England’s Triple Crown; The Minstrel; Shareef Dancer; Secreto; Northernette; El Gran Senor; Lomond; and Fanfreluche.

He has been named the 20th century’s best sire of sires, producing multiple champions in the United States and the United Kingdom. According to the Thoroughbred Times, at least 11 sons of Northern Dancer became outstanding sires: Be My Guest, Danzig, El Gran Senor, Fairy King, Lyphard, Nijinsky, Northern Taste, Nureyev, Sadler’s Wells, Storm Bird, and Vice Regent. Northern Dancer’s influence extends to Japan, where Northern Taste stood at stud at the Yoshida family’s Shadai Stallion Station and was the leading sire in Japan for 10 years. By early 1980, Northern Dancer and his son Nijinsky II had combined to sire the winners of almost US$20 million in stakes. He also became the grandsire of 1991 Canadian Triple Crown winner Dance Smartly, who became the richest filly at that time with 12 wins from 17 career starts, including the 1991 Breeders’ Cup Distaff and purses of over $2 million. She was also a success as a broodmare.

In 1964, Northern Dancer was the American Champion Three-Year-Old Male Horse and the Canadian Horse of the Year. In 1965, he became the first horse voted into Canada’s Sports Hall of Fame (joined in 1996 by Canadian Equestrian Champion Big Ben). In 1976, Northern Dancer was an inaugural inductee to the new Canadian Horse Racing Hall of Fame and was also inducted into the United States Horse Racing Hall of Fame. In 1977, Northern Dancer won three world sires’ premiership titles for the number of: international stakes winners; international stakes wins, and; total stake earnings of his progeny.

He was retired from stud on 15 April 1987 at the age of 26, living at a Windfields Farm property in Massachusetts. After an attack of colic, he was euthanized on 16 November 1990 at the age of 29, and his remains were brought back to Canada for burial at Windfields Farm in Oshawa, Ontario. Windfields Farm has subsequently been sold to the University of Ontario, and Northern Dancer’s burial site is not publicly accessible.

Northern Dancer was inducted into the Ontario Sports Hall of Fame in 1998. In 1999, Canada Post honoured the horse with his image placed on a postage stamp. A residential street was named after Northern Dancer on the former site of the Greenwood Race Track in east-end Toronto. Also, a life-sized bronze statue of the horse was placed outside Woodbine Race Track in northwest Toronto.

Over the decades, a number of books have been written about Northern Dancer. The 2006 book American Classic Pedigrees (1914–2002), by respected pedigree authority Avalyn Hunter, recounts how Northern Dancer and his sons have established a royal dynasty that has profoundly dominated the international bloodstock market.

If you have some time, watch the four part story of this legend.