Start the Live Feeds, ManorPark has come forth to answer some of your questions about his amazing feat in the Winning of the 4yo Medium Triple Crown. His 64OR 4yo Competitive Stallion, Kingsman has completed one of the hardest things in the game. To get a Triple Crown. To do this, he won the Lowe Guineas on October 24th on Slow, The Australian Cup on November 28th on Dead, and The Jewel of the Mile on December 26th on Good. Not only did he manage to win all 3 on different ground types from slow to good, but he also managed to only lose 1 of the races all season, the qualifying round of The Australian. The odds by the bettors were in his favor with him being the $1.52 to $1 favorite.

Here are some questions answered by the Trainer, Breeder and Owner of this Champion Stallion, ManorPark.

Q: – How does it feel to be the first stable owner trainer to win a 4yo Triple Crown Series?

Now its over with I’m just delighted we were able to get that final win. Wasn’t sure how Kingsman would go over the course of the season having started off in slow conditions for the LOWE Guineas then dead of the Australian Cup. He’s come out of the Jewel in great condition though so already looking forward to next season. Q: – Do you consider Kingsman to be the best 4yo ever in TK History?

The best? That’s hard to answer really as you can only judge a horse by the opposition faced or times ran. On times alone he looks good, think his speed today was faster than any 4yo medium has run before so that’s promising. Comparisons between generations is impossible.

People can talk about cups won but the simple fact is the champions before didn’t have anywhere near as many cups to go at as they currently do now. Some were lucky to even have 1 in a whole season at their chosen distance.

Q: – When did you realize Kingsman had a real good chance to win the Triple Crown?

Probably when he won the 3yo Guineas. Thought the speed was impressive so looked it up. Turned out to be the fastest ever race in its history which is some going when you consider some of the great horses to win, and lose, that over the years.

Even more impressive when you factor in that since the schedule change to incorporate the TC series the race was 7 weeks earlier than it used to be.

Q: – Today we had a chance to witness and watch another Triple Crown winner, Angel’s 3yo Relaunch, winning the 3yo long/epic TC Series, what are your thoughts on this, and do you think this will become a trend?

Its a fantastic achievement to step up from shorts to longs and epics and win like it did. I personally didn’t think backing up for 3 cups, especially the longer distances was possible until some 5-6 seasons ago when we saw karaka’s Pounamu win the TC before it became the series we see today.

Think now its been shown to be possible there’ll be more and more attempts at the TC’s which can only be a good thing. Sadly we see some go after a local or regional cup with horses more than capable of winning a WC, just got to take a chance and have faith.

Q: – Some people consider you to be a genius and the best player/trainer in the game, what is your take on that?

Obviously its great to be considered in such a light as means I’m doing something right but there’s plenty I want to achieve before I call it a day and then my record can be picked apart.

When I was started out it seemed the norm to pigeon hole players, some as great breeders, some as great trainers, some excel with restricted runners etc. Thought why cant someone do it all, so that was the target. Helped when you had the likes of Wilpy, Pengo and Aquananu to look up to and try learn from.

Be great to see more newer players come through and challenge the older stables and help raise levels to a new high. 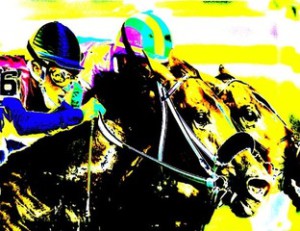 Q: – Being a player on Track King since 2009 and having a lot of success and now consider an elder statesman of the game, what do you think about the future of the game, and do you see more parity today then you did when you first started?

The games very different from when I started as back then there was no such thing as IP, age restricted cups amounted to be about 1 a season and cup purses were miniscule. Made life difficult for the newer players as any cup you went for you learnt any awful lot, usually from the severe beating you got.

The number of cups we have now hopefully make the game much more enticing for the newer players as any given weekend there’s usually something taking place be it local, regional or World cups.

Its great in that this opens up the chances of them picking up silverware as probably wasn’t the best look the same 4-5 stables seemingly winning everything.

I’d love to see game numbers increase to the point we got back to those 20+ cup field days.

Q: – What are your future Plans for Kingsman? Any more attempts at Triple Crowns for him? Do you hope to make him a champion stud like some of your other ex-champs?

Kingsman will follow in his sires, Fanatic, footsteps down the stud route at some point but plenty of time between now and then. Another crack at a TC doesn’t look possible unless I try to double up on longs and not sure how feasible that is when you look at some of the opposition and the head start on experience they have. Never say never though!

Thank you ManorPark for taking the time out of your busy training schedule to answer some of the games fans questions about the amazing feat that he managed to accomplish yesterday. Best of Luck going into the new season with your Champion Kingsman!