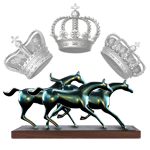 For the first time in Track King history, we finally officially have not one but two Triple Crown winners in the same season. This is a very special and exciting time for both world class owners and there champion horses.

Congratulations to Relaunch and owner Angel’s Flight as the first 3yo Triple Crown Champion.

Congratulations to Kingsman and Manor Park as the first 4yo Triple Crown Champion.

Kingsman and Relaunch both win their heats

This past weekend both horses continued to show their dominance by winning their heat races to set themselves up to what should be two exciting finals next weekend.

With Season 33 winding down, we have two horses, two cups down, one cup left, chasing history and going for the ultimate crown which is the Triple Crown. Winning all three of these races in any age group series is considered the greatest accomplishment of a Track King Owner and their horse.

Last hurdle to conquer is the Jewel Of The Mile, (Wk 11/12) at River Nile Delta Racecourse in Africa.

Relaunch, a three times world cup champion out of Angel’s Flight Stable in the 3yo Epic/Long/Epic series. Relaunch winning the Epsom Derby Stakes, (Wk 2/3) at London Bridge Racecourse in Europe, and the So You Think Cup, (Wk 7/8) at Sydney Harbour Racecourse in Australia.

As we get closer to the final leg you can start to feel the excitement in the air. All eyes will be focus on these two champions to see if they can both complete the hat trick. It comes down to one race to see who will be worthy of wearing the crown and be immortalized in Track King History forever…