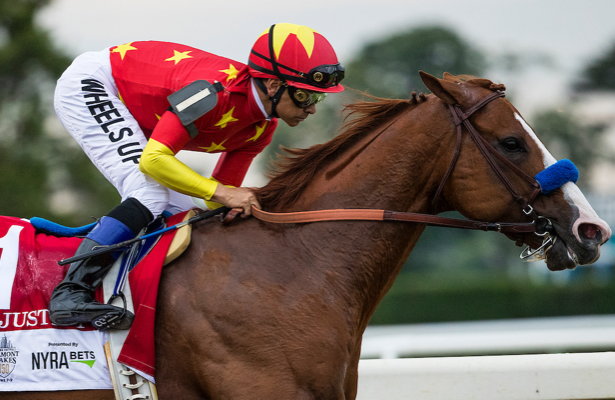 Winning the Triple Crown, historically, has made Justify an essential lock for Horse of the Year honors in the United States. But he still has work to do if he’s to claim the international equivalent. The undefeated son of Scat Daddy remained at No. 4 on Thursday in the latest edition of the Longines World’s Best Racehorse Rankings, which rate horses based on their single best performance for the calendar year. Justify earned a 124 rating from his Kentucky Derby win and has stuck on that number following his victories in the Preakness Stakes and last Saturday’s Belmont Stakes. He still in elite company, however, as the highest-ranked 3-year-old in front of 10th-place Mendelssohn, who earned his top number in a runaway UAE Derby (G2) win back in March. Ahead of Justify are the Australian mare Winx (130), who has won 25 consecutive races, as well as retired Pegasus World Cup winner Gun Runner (129) and Cracksman (125), a top European turf runner who stands to improve his numbers with bigger tests coming up this summer.

Trainer Bob Baffert’s horses have won the last three Longines World’s Best Racehorse awards, with American Pharoah in 2015 and Arrogate in both 2016 and 2017.  Under direction of The International Federation of Horseracing Authorities, handicappers and racing officials from around the world assign the ratings.

American Pharoah exited his Triple Crown run with a 128 rating, four points better than Justify. Justify’s best chance to boost his number would likely be in the Breeders’ Cup Classic, if that’s his first (and possibly only) race against older horses.

West Coast is tied with the Triple Crown winner in fourth thanks to his Pegasus World Cup runner-up effort. Other top Americans listed are Grade 1 winners Accelerate and Army Mule (tied for 13th), plus Audible, Good Magic and Mind Your Biscuits (tied for 19th).