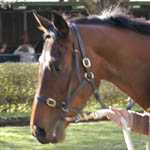 Champions come in all shapes and sizes, because as the old adage goes, it’s what’s on the inside that counts. However, one thing that remains constant is that true champions are rare. They run through your hands like quicksilver and there is no telling how long they’ll be around before they slip through the hour glass along with the sands of time.

How great was he on the racecourse?

The thing about Patrobas was his prodigious longevity. He came back year after year after year after year and kept on beating the best around. The longer a top-class horse’s career, the bigger his fan base, and Patrobas was the classic example. This was a horse that raced with an astonishing level of consistency, ready to give his all every time. His record is awesome:
• 35 races with 29 victories and another 6 in the frame.
• $15+ million in prize money.
• 14 World Cups.
• 2 Regional Cups.
• Clean sweep of all the cups in his age group bar one, over long and epic distances.
• Three outright world records; 2500m, 2600m and over 3150m.
• Countless age group world records over long and epic distances.
• Patrobas missed the 5yo Triple Crown by a whisker, but with his achievements he fully deserves his place in history.

We had a chat with trainer Manor Park Stud about his champion on his eminent retirement from racing.

I’d certainly rank him as my best horse to date I think. Kingsman while a brilliant youngster winning all his age restricted cups didn’t quite go on to hit the heights as an older horse as I’d hoped or expected. Patrobas was also impressive with age restricted success but went on to show his ability over both the long distance and epics winning open age cups in both and setting WR’s on the way and being involved in some of the fastest races ever also in defeat.

I try and keep it pretty simple when keeping foals. The first thing I look at is stat distribution as generally have an idea of the distance I want to race that season. If the style then matches the cup cycle with weather etc then I’ll finally check the genetics. If everything is in order then that foal is shortlisted. Patrobas was by far and away the best foal I had that season so it wasn’t much of a decision, his stats were a perfect starting point for long distances as that was his main aim from the outset.

His first race he showed the heart of a lion as not entirely sure what happened but he really should have got beat as for some reason took off in the second quarter. Really had to cling on in the final quarter for victory. It was in the heat of the So You Think cup as a 3yo I first thought he could be special as under relaxed instructions ran 61km+ which at the time was the first 3yo to do so, not sure if that’s still the case.

Probably his final TKO win. To run near 64km over the epic distance and set a third WR in consecutive races was pretty special, it was also a pretty intense race with Ped’s runner as the lead changed a couple of times and there was little between them at the finish. Before that it would have been the GnuMAD he finished third in, crossing the line I thought something had gone massively wrong as the first two home were so far in front. Then when I saw the times and speeds I was just stunned, to run 64km+ and still not come close just made it an amazing race to be involved in. Think its still the fastest ever long race by some way.

Knowing the instructions he raced with early on in his career there was always plenty left in the tank if need be. Sometimes horses come along that just do things so much easier than others, I’m not sure what it is or why it is. The first real test he had was going for the TC which I probably stuffed up a bit as made a bad choice with the jockey and instructions.

Just his ability to make things look effortless in some races. He made me make changes to my race instructions a little as opened my eyes a bit such was his impact.

My big target back when I really set them was to be the first to win 100 World cups, that was always the aim. Since then stable direction has been lost a bit, life’s busier than ever with work and my 8 month old boy so the games taken its place in the background. We’re also in the early stages of building our long term home so that will only ramp up over the coming months, cant wait actually. Probably the main thing that keeps me playing is trying to keep up with the newer players coming through and continuing to compete with some of the older players who’ve earned my respect and then some over the years and give me the sort of challenge that for me the game is all about. A wise man once said “The greatest teacher, failure is.” really resonates with me, you learn more from the losses than you ever do the victories.

Sadly I think I might be scratching around for another one of those for a while. Bigger Rolly looks potentially pretty good but being a mudlark will have limited chances to show it. There’s currently a pretty nice looking foal brewing out of Kingsman who with some luck could be our next great hope, will see what the TK gods bestow on us this weekend.