This lady we about to introduce has been around the TK race circuit since 22nd June 2009. If you ever had a conversation with her you would know that she is a sweetheart of a person with a bubbly personality. Her passion and commitment for the game has never wavered by her competing in tough leagues, writing reviews, or organizing and rallying the troops to go into battle in Rivalry Cups. She is a 2 time World Cup winner, a 9 time Regional Cups titles holder, with multiple league cups wins and top 5 finishes. She is known as the Princess of Track King.

Q – Any particular reason you named your stable Moonlight Stables?

Q – What have you done to keep the passion up to play for so long and have such good success?

Q – How long did you take to find your feet in the game? Q – Your first world cup is always special, tell us about your first winner Mud Bath? 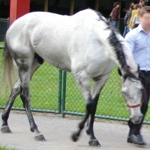 Q – Which retired horses in the game have left the biggest impact on you? Q – Which Stables do you find most difficult to beat?

Q – Over the years, how have you seen the game evolve and what are the biggest differences today compared to 4 years ago? Thank you so much HorsePrincess for spending some time under the moonlight with the NUTS!