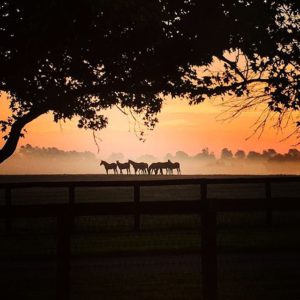 We are deep in Bourbon County, just out of Paris, Kentucky, a slow town with a little railway station that looks as if it was left behind from the Civil War. Around us are the fields of dreams, dotted with oak trees and enclosed by identical four-rail fences, all stained black. Wisps of fog hover low over the bluegrass which has been washed bright green by a summer shower. Every so often, the white columns of a mansion peep discreetly through clusters of trees. The mood is such that if Scarlett O’Hara were suddenly to glide by in hooped skirts, carrying a parasol and cooing, you would probably think, yes, she fits well enough.

We are, after all, in a rare place. Some of the richest farming dirt in the world. Old families. Old money nicely understated. A warm vein of cordiality that often begins with the greeting ‘Good to see ya’all’ – which can be confusing if, as often happens, there is only one of you. A freemasonry which has the thoroughbred as its icon, and which binds the groom and the boss into the same brotherhood and somehow contrives to make their material differences seem incidental. Here the horse is not much a way of life as a reason for breathing.

The Hancocks’ Clairborne stud is just out of Paris. No farm anywhere has more influenced the evolution of the thoroughbred this last half century. Claiborne is all about the brotherhood. And, God knows, it is understated; no bragging, no hustle, no brochures in Technicolour. Claiborne has been going so long it is a shrine as much as a business. And it is somehow a farm before it is a business, only as good as its current battery of stallions and what it puts back into the soil. Who needs a sales pitch? You learn soon enough why Claiborne is what it is. All you need to do is watch and listen.

Clay Arnold, one of the stallion men, is stooped by his 70 years, yet there is a boyish serenity in his face. You figure this is because he likes horses and the place and has never wanted to do anything else, and Clay says you figured right. He clips the lead shank on the old bay stallion who is bathed in a pale yellow glow by the sunlight streaming into his box. The stallion steps out calmly, tall with a great length of rein, and a head that is surely what the man meant when he coined the line about ‘the look of eagles’.

But the bay is light of flesh on top and behind. he has lymphangitis in the hind legs. The near hind is swollen up to the hock. The off is so thickened as to be deformed, turned way out and filled so tightly that pink skin flares through the white hairs just above the hoof.

The old horse was grinding away on courage at the end of his track career; he is not about to play the invalid now. The light burns brightly in his eye. He lets you rub his forehead but does not acknowledge you. Like any good stallion, he does not look at you but over and beyond, out over the fields of dreams. 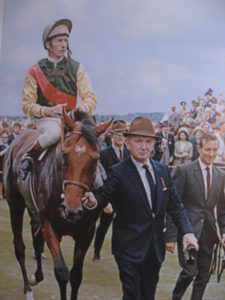 He is Nijinsky, winner of the 1970 English triple crown. ‘Legend’ is a devalued word in sport; here, for once, standing calmly before you, is the genuine article. Nijinsky was one of the truly great racers of the century. He is also one of the great sires; now 23, he has produced ten champions, 125 stakes winners, and a sales yearling who brought US$13 million. Clay Arnold has handled a few legends. He merely touches the old horse on the neck and drawls; ‘Yessir, he’s a nice horse … nice horse … I like him a lot, yessir.’ 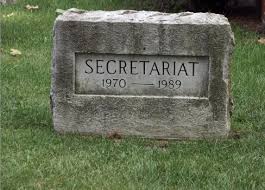 Claiborne is also about ghosts. To feel them you need but to step into the stallion cemetery and read the names on the grey headstones; Nasrullah, died 1959, one of the immortal sires … Secretariat, the great red horse with flaring nostrils who won the Belmont by 31 lengths … Bold Ruler … Round Table … Princequillo … Blenheim … Gallant Fox … Buckpasser … Double Jay … Court Martial. Go to a yearling sale anywhere in the world, go to Dublin or Argentina or Launceston, and you will see these names on practically every page of the catalogue. Claiborne is indeed running out of burying room, but there is a plot left for Nijinsky.

Nijinsky seems happy to stay out of the place. He stands quietly for Clay Arnold and never thinks to fidget. Arnold brings out stallion after stallion for us. Not one plays up. There’s Mr Prospector with his long plain head, who stands for around US$250,000. And Ferdinand, Nijinsky’s big chestnut son who won the Kentucky Derby. And the hulking Cox’s Ridge, sire of champions. And little Danzig, also commanding a $250,000 fee and built in the classic Northern Dancer mould; neat, strong through the body and with a lovely head and jowl. As I said, all you have to do to learn is to watch. These stallions are so well behaved, so content, because generations of stallion handling are built into Claiborne, The place has always believed in the primacy of stallions, in the farming truism that a good bull is half your herd and a bad bull is all your herd.

Claiborne has been chasing stallions since Captain Richard Hancock came back from the Civil War determined to breed the best, It has chased them in Europe, South America and Australia, looking for hybrid vigour, for that magical beast who ‘outbreeds’ his own pedigree and performances. No family has done more to turn the American thoroughbred into an international commodity than the Hancocks.

In 1925 Arthur Hancock decided that American horses were being bred back to themselves too much; he wanted to widen the genetic pool. So he formed the first significant syndicate in breeding history to buy the top French colt Sir Gallahad for $125,000. In his first season, Sir Gallahad produced the triple-crown winner Gallant Fox. Sir Gallahad was leading sire four times and leading brood mare sire for twelve consecutive years. 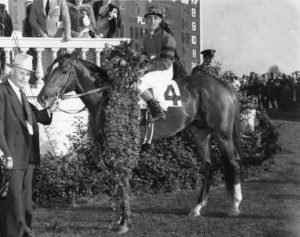 In 1936 Hancock formed another syndicate to buy the Epsom Derby winner Blenheim from the Aga Khan. Blenheim soon produced the triple-crown winner Whirlaway. Hancock next tried Princequillo, who many said would not a make a sire because of his staying pedigree and lack of early speed. Princequillo produced the champion racehorse and sire Round Table. 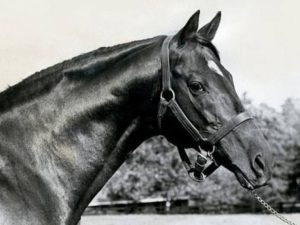 The most intriguing building on Claiborne is not the white stallion barn with its yellow trim and the brass nameplates that tell you Bold Ruler and Secretariat lived here. Its the breeding shed, where every year about 1000 mares are covered by Claiborne’s twenty-five stallions. In recent times, some elaborate breeding sheds have gone up in Australia, complete with hot and cold running vets, lasers, rubber floors, video’s, all the software of the hi-tech age. They have the decor of hospitals. The breeding shed at Claiborne is clad with warped timber slats on which the black paint has blistered and peeled. The shingles on the roof are stained green with mildew. Inside, the floor is uneven, and covered with bark. The only concession to modern times is the yellow padding around the walls. 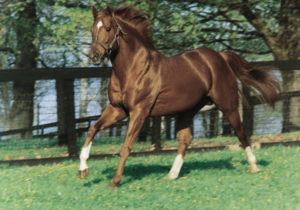 Yet, heaven knows how many great horses have been fashioned in hasty lust here. There have been only eleven triple-crown winners in the history of American racing; no less than five were conceived in this rough shed. A Kentucky horseman, one of the brotherhood, explained it like this; ‘Yessir, it’s not the fancy things inside the shed that count; it’s the quality of the horses who walk through that door.’

If you keep quiet and listen, you can learn a lot at Claiborne.