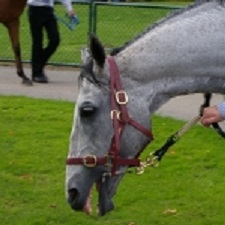 Dreaming with your eyes open

The story of Relaunch is a rags-to-riches tale of a horse that began his career over the short distances and went on to defy the odds and become a LEGEND over long/epic distances in Track King history.

Datil (later renamed – Relaunch) was bred by Paul Burow of Full Moon Stables. He was born on the 3rd of July 2015, out of the Lihin The Sun mare, from the second last crop of Money Bag, a grandsire of Wild Smokey, one of the best medium runners the game ever seen and a great grandsire of Sir Lancelot, without question the dominant sire of his generation and could well hold claims to being the greatest of all time. He is a massive grey colt, that stands over 19 hands, when fully developed.

He was initially purchased by Stiff Competition for the relatively low sum of $1,530,000 as a two year old.

Datil made his career debut as a two year old in Sep 2015 with a respectable 4th in the Sires Produce Prelude over fast ground at Mato Grosso Racecourse.

The stable decided to take time out from the game and placed most of their horses up for auction. The performance in the Sires Produce Prelude must have prompted the new owner Angel’s Flight to purchase the colt. He changed hands at the bargain price of $2,380,000. The stable gave him his new name – Relaunch – in honor of a horse that made a big impact on him as a whipper-snapper.

The new owners wasted no time and entered Relaunch in the finals for the Sires Produce, they sent the grey colt to Rocky Mountain Ridge Racecourse to prepare for the race. With jockey Marcelo Lape on top, Relaunch won the race in good fashion against a top field, announcing his presence with authority as a leading contender for the future short classics.

What happened a month later astonished the racing world? Angel’s Flight must have spotted something that everybody else missed and decided to enter him in one of the qualifiers for The Epsom Derby, an epic race for 3 year old’s. He went into the race with no experience over the marathon trip. He won the qualifier in good speed, averaging 59,28 km/h, just outside the world record, against some fierce competitors from top stables. Everyone was watching the final to see if the run in the qualifier was a fluke. With new stable jockey Robbyn Aysien on aboard, Relaunch delivered a jaw-dropping performance to win the race in spectacular style.

What next did the people ask?

Relaunch began to generate some buzz when he scored his third world cup victory in The So You Think Cup at Sydney Harbour Racecourse in November 2015 in world record time. He showed his brilliance earlier, when he beat the mud larks over slow ground in the qualifiers, labeling him as one of the best 3 year old’s of his generation.

After winning the The So You Think, setting blistering fractions, Relaunch was brought back home to Leeds Scenic to relax. Angel’s Flight had handled him carefully all year, knowing the Grand Prix de Paris mile and a half would be his ultimate challenge.

I believe it was Roald Dahl who said “Those who do not believe in magic will never find it.”

On December 26, Relaunch created history when he won the Grand Prix de Paris, he held off late-charging Voodoo Child for a thrilling victory, becoming the first Triple Crown winner in the process. It had been a long, hard road, but he was now a living legend destined for immortality. Angel’s Flight had accomplished the improbable task of getting this ball of fire to relax and stretch his speed out to a mile and a half.

“Relaunch took us to places we never imagined we could go,” Angel said. “He brought a euphoric feeling to a lot of people, me included, whenever he ran. He is everything you could ask for in a racehorse.”

“Relaunch game, if you could read into that beautiful mind of his, was to simply win the race,” he said. “He just wanted to win. It didn’t matter by how much. He knew how to win with his heart and his head.” – Aysien added

At 4, Relaunch began the season with a victory in the Diamond Cup at River Nile Delta Racecourse. Relaunch’s win streak was snapped in his next race, an attempt on slow ground in the Cox Plate at Sydney Harbour Racecourse. Relaunch acquitted himself well by finishing third behind mud lark and double world cup winner Siamese Dream.

The Lowe Cup was payback time for Relaunch in his first come back run as a five year old. Clara Colla, who had regained the mount, rode a cracker, to steer him home over dead ground. The stable skipped the next race The Aussie Clothing Down Under Long in the slop, as the toll on a hard campaign over the long and epic distances at three and four was starting to tell. It must have been a difficult decision not to go for the five year old Triple Crown, but end of day the game is about managing your horse. Without the horse you have nothing. Returning to Sydney Harbour Racecourse in June 2016, Relaunch took aim at Recent Grand’s record over the distance of 2800m. A confident Clara Colla had the race well measured, guiding Relaunch to a resounding victory over Addie Over Magoo by a big margin.

At 6, Relaunch had to work hard to beat off the challenges of Flying Zamboucca, Voodoo Child and Marrakech in the Platinum Plate. With new rider Virgil Vaulet in the irons, Relaunch then concluded his 6-year-old season with a remarkable effort in The Golden Eights Cup at River Nile Delta in Africa. In a good field, he drew away smartly and covered the 1888m distance at a average speed of 61,49 km/h. The win took his total to a record 10 in World Cups.

Jason Wood writes on his website thepaddockview.com about the five things horse racing can teach us in life.

I always think of that line from the movie Secretariat, “Run your Race”. It is repeated a couple times throughout the movie and has become a sort of motto for me. Racing has become the ultimate metaphor of my life. If you think about both have a start and finish, but what matters is what happens in between.

– Horses can run, but can they win without a team? It takes a team to prepare them for the challenges ahead. A team to support them during injury or weakness. In our lives, we all too often overlook how important those around us are. Whether it be our family or friends, we need a strong team in our corner! Sometimes you need a little voice in your ear (or on your back) to wake up and make the right choice.

– Think back to Zenyatta’s thrilling finishes. There were times that it looked like she would never get around all that traffic in front of her. The finish line was too close! She didn’t care, she just ran her race, she didn’t quit or panic. Life constantly throws us obstacles, but we must fight on and find a way around.

– A human longshot is often called a dreamer. The odds are stacked against them and everyone counts them out. They don’t pay attention to what others think, they pin their ears back and find a way to get the job done. Whenever a long price hits, win or lose, a part of me gets excited. I am reminded that anything is possible!

– As handicappers, we love to study the past and place a lot of value on it. We are reminded often that the past doesn’t always dictate the future. This translates to focusing on tomorrow and leaving the past behind. It doesn’t matter what has happened because each morning that bell rings, your gate opens to another day. You make it what it is!

– The son of Bold Ruler can attest to this. When he went out to that fast early past in the Belmont, people thought he was doomed. He was out of his comfort zone and taking a risk. I think it is safe to say that it paid off! We often sit back and stay in our comfort zone with our heads in the sand. If we let that mentality win, we will never know our full capability.

Relaunch is that son of Bold Ruler in this silly cartoon GAME. He found Angels’ Flight, a dreamer, who is undoubtedly the best trainer of age group horses at the moment. What about the detractors saying he won’t see out the trip? Hands up here – I also was one who said in the first place that on pedigree he shouldn’t stay. When asked for advice on how to deal with horses, Monty Roberts often answers “The horse will tell you.” Frustrating as that may sound, he’s generally correct, but it takes an exceptional horseman firstly to listen and secondly to have the courage to act on what they hear.

Tesio said “A horse gallops with its lungs, perseveres with its heart and wins with its character”. Of course, Relaunch shouldn’t have won the Triple Crown, but just occasionally life hands us a fairy tale, and here we have one. Because Relaunch has made it. It could all have been so different, but from rather obscure beginnings, he has been blessed with good genes, a chance encounter with a trainer who was prepared to gave him a chance anyway and who above all has ignored the paperwork and listened to the horse. That awful-wonderful stomach-churning dread and anticipation in the run up to a race is a feeling like no other!

“Stories you read when you’re the right age never quite leave you. You may forget who wrote them or what the story was called. Sometimes you’ll forget precisely what happened, but if a story touches you it will stay with you, haunting the places in your mind that you rarely ever visit.”  ― Neil Gaiman,

What next for Relaunch?

TK world of cartoon horses is an eternally fascinating, challenging and rewarding one. Sometimes life is kind and you get to take your time being fascinated, challenged and rewarded, but more often than not, the ups and downs come at you thick and fast and you don’t really have the luxury of perspective or time to draw breath and be happy, sad, horrified or warm-hearted until much later, usually once events have run their course and you’re sifting through the receipts! But one thing is certain, as anyone who has had a special or exciting horse in their string will know, they sure do give you a reason to get up in the morning. Relaunch is that horse.

The future – I am not concerned – Relaunch is in good hands.