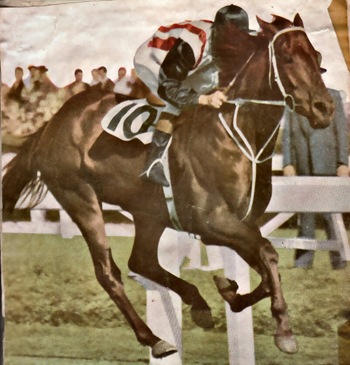 Alvin Crackers – Thank you for taking the time to interview, first up you have started to make your mark in recent seasons in the world cup scene with Marilyn Monroe leading the way. I see you purchased her for a bargain basement of $816k, of all the 2yo of her season what did you see in her back then?

BLACKBERRY – What stood out the most with MM was her height and stide and of course her genetics. I started out with her as a epic horse and never tried to make her into something she was not.

Alvin Crackers – Can you tell us a bit about how you approached the task of training MM and back then was it important for you to race her early or just build for long term success?

BLACKBERRY – With MM I concentrated on xp and stat balance and not so much fast growth of stats. Her first attempts at cup racing did not work out as well as I would have liked, but she came into her own as a 6yo.

Alvin Crackers – One of Marilyn Monroe early starts in a world cup was the 5yo Aussie Epic almost all in that field back then or since have won a WC, how much has this driven you to make MM a world beater?

BLACKBERRY – MM was a long term project from the start as her stats were not really ready as a 5yo  but i thought she had maybe a chance to stick it to the man at that point. The things that I learned in my first real attempt at epic racing, losing to Tripp Leailani about 3 different times with what I thought was my best attempt helped me a lot with getting MM where she needed to be.

Alvin Crackers – Track King Open was a huge win for you with Marilyn Monroe her first, how did you see your chances on that day, and has there been a bigger thrill in the game for you?

BLACKBERRY – There were 2 horses I was worried about in the Masters, but both had run the week before in the Epic breeders so they were at a disadvantage I think, in that they had a quick turn to for the Masters. Focus on the task at hand was my advantage.
As far as big thrills in the game I would have to say that my first win in The Open was Number 1 (as it was a very close race and more exciting to watch) but the Masters is a close second.

Alvin Crackers – With MM you just scored her 4th WC and her first Track King Masters, she is 10yo now, is she up for some Classic glory or another Melbourne Cup?

BLACKBERRY – As far as what is next for MM, I am torn actually, I would like to go for for another Open with her but a week 1 foal might be in store for her. She has won everything that I could dream about with her. But she’s 10yo and so this is her only chance to pass on a piece for the future with a 2yo and to help along the stables future, so in about 2 weeks so we will see.

Alvin Crackers – The next generation what the hopes and dreams in the future can you give us some insight into your next hopeful star?

BLACKBERRY – I have one star on the horizon for epic future but maybe will explore the shorter races as I have not had too much success at the med and below distances and have alot to learn there.

Alvin Crackers – Was there any one stayer you decided to model MM on and if so which one or did you just get feedback of other players?

Alvin Crackers – you have said you will now breed MM, that for some would be a relief in season ending cups?

BLACKBERRY – I would love to race MM in her last Open but have to make a choice on that or breed her. Will decide this week I guess but leaning toward breeding.

Alvin Crackers – This game you can always learn, now Blackberry you say you have not had a lot of success over the lesser distances I suppose no greater challenge than to master most distances you may have a lot to learn, will you learn most by trial and error you feel is that the best way?

BLACKBERRY – a lot of trial and error and looking at other good horses, and then pick some minds once in a while if I get stuck seems to work for me.

Alvin Crackers – Finally blackberry your toughest opponent Marilyn Monroe has had and your future goals and aspirations, what are they, any cups you dearly would like to win?

BLACKBERRY – MM nemesis was always Screenscraper as had to race against that horse in league races and cups. I had some down races when the right jock was not aboard and could never relax. I learned alot in league races that I could carry over to cups, because of the challenge MM had with Screenscraper.

Finally the trophy I covet now is The Jewel Of The Mile, and not sure if that is happening any time soon but its what I am working toward.

Alvin Crackers  – Thank you so much for your time Blackberry and once again congratulation on winning the Masters and contributing to the Nuts site.

BLACKBERRY – Thanks Mentor for your passion for the game and for sharing your knowledge when needed.