When you first start out the game, you will need to hire a jockey.

As a new player, it is best to get an Apprentice Jockey to start with, they are at least 40 times cheaper a week. And it will give you the option to have a top end Pro Jockey later in the game.

App Jockeys tend to cost between 800-1200 a week, depending on what one you get, and the price never increases until you graduate them, but we will talk about that later.

This will give you a step by step guide on how to hire an App Jockey. 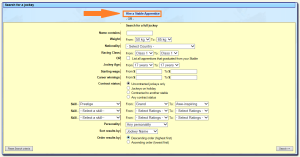 This will take to you to the general hire a jockey link. At the top of this page as seen in the picture to the left, you can click on the button next to the orange box to hire an App Jockey. Or you can click this link: http://www.trackking.org/jockeyapphire.php

Once you have done this the page below will appear. On this page you decide how many jockeys you would like to look at, at this time to pick one to work with. I would recommend getting at least 3 at a time. Each App Jockey “Interview” cost $1,000. As seen below, then you click Interview Apprentices. Also on this page it will tell you how many Apps you currently have, in my stable I had 1 already, and you can have up to 2 at a time.

Once you have decided how many Jockeys you would like to look at you will then need to decide which jockey you would like to hire. Generally speaking it is best to hire the youngest one you can, 17-20 years of age, and most people prefer lighter jockeys, 50-55kg. The temperament that you want is up to you. And they are fairly self explanatory, but we will discuss later. As you can see the information is pretty basic that they give you to start with:

Weight (This can not be changes and is considered one of the most important traits of an App or a Pro Jockey),

Nationality (which makes little to no difference in the game and does not influence your jockey in any known way),

Top Experience Distance and Ground (which you will modify over time and is not overly critical),

Racing Temperament (This can not be changed and to many is one of the most important parts of the Jockey),

Starting Wage (this will stay the same throughout the Jockey’s App Career),

Morale (which changes over time based on how often and well the jockey races and how often you send to the races).

If you don’t like your options you can always say interview more jockeys. Otherwise you can “Hire” the jockey that you like.

You will then, if you want to hire another jockey have to start the process again, or if not, you can then go home and look at your brand new jockey

Each new jockey is given 20 Experience points to use once you hire them. The initial points are highlighted in the orange box. As you assign them, they will decrease, and you will have to wait till the next week to get more points to use.

Once you hire an app you will need to keep it for at least 1 month. A word to the wise, most new apps are not the best at racing, they need experience and traits to become better. Giving up on an app right away is not the best thing to do. You can keep an app jockey for 365 days. In that time, if you race a lot and remember to use all of your app points you can have a jockey with max experience in many distances and ground types. Graduating an App will be in a later post.

Ability to work with difficult horses:

Traits that are most common for jockeys are:
Sits on rail
Instant rapport
Enjoys high speeds

(This is for both App and Pro Jockeys)

Aggressive Temperament: These are your most aggressive type jockeys in the game. They will push very hard, this includes sometimes through holds and relaxes. They can sometimes fight hard against a horse in a race. These are not meant for every horse, they can fight terribly with some horses. Also they are not great with young horses between 2-4yos because they can push the horse through needed holds.

Fires Up Late: These will push a little bit extra in the last quarter of the race. They are aggressive types, but not as aggressive as the Aggressive Temperament. These jockeys can have some issues getting out of the gate though.

Fires Up Very Late: These will push a little bit extra in the last eighth of the race. They are also one of the aggressive types, but not as aggressive as the Aggressive Temperament. These jockeys can have some issues getting out of the gate though.

Fires Up Early: These will push a little bit extra in the first quarter of the race. They are also an aggressive type, but not overly aggressive. The jockeys can sometimes have an issue finishing out a race though.

Fires Up Very Early: These will push a little bit extra in the first eighth of the race. They are also an aggressive type, but not overly aggressive. The jockeys can sometimes have an issue finishing out a race though. These can be useful for a slow start sprinter/short runners.

Tends To Ease Late: This is the least passive of the passive type jockeys. One of the least used jockey types, because they wont push in the last quarter of the race to the fullest. Can be useful for high end stakes runners that don’t need to be pushed to the brink to win races.

Calm: These are one of the least aggressive types in the game. Common to be used on horses that are young (2-4yo) and longer distance runners. They will push but not overly push in a race and are good for aggressive type horses.

Passive Attitude: These are the most passive (get it) of all jockeys, they are common to use on young horses between 2-4yos. They wont push to the breaking point. They can work very well on aggressive and temperamental horses.

All of these traits do not mean that a particular horse and jockey do or don’t get along or perform. The truth is that the more times a jockey rides a horse a Rapport is developed between jockey and horse and they are more likely to perform better the more times they ride together. That is why you will see older stable keep the same jockey on the same horse for long periods of time. It is not forgotten if you lose the jockey for a while either.