Penny Chenery, who took over her father’s thoroughbred farm with little knowledge of horse racing and became one of the few prominent women in the sport as the owner and breeder of Secretariat, perhaps the fastest horse who ever raced, died on Saturday at her home in Boulder, Colo. She was 95.

Her death was announced by her family.

When Secretariat won the Kentucky Derby, the Preakness and the Belmont Stakes in 1973, capturing the Belmont by an astounding 31 lengths, he was a national celebrity. He appeared on the covers of Time, Newsweek and Sports Illustrated and attracted thousands of fan letters.

When Secretariat died at 19 in 1989, Ms. Chenery, who oversaw his fortunes as the manager of her family’s Meadow Stable in Virginia, recalled how he had enthralled so many in troubled times.

“In 1973, the country was in an emotional slump,” she wrote in The New York Times. “It was the time of the Watergate and Nixon scandals, and people were looking for something wholesome to admire. I’ve always felt that because he was a chestnut horse and our stable colors were blue and white, he was running in red, white and blue.”

The story of the wonder horse and the emergence of Ms. Chenery as a pre-eminent figure in thoroughbred racing have endured in popular culture. It was reprised in the 2010 Disney film “Secretariat” with Diane Lane portraying Ms. Chenery as the elegantly dressed and quietly determined owner and Ms. Chenery herself appearing in the film as a race spectator in the grandstand.

Ms. Chenery first gained prominence in 1972, when Secretariat was horse of the year as a 2-year-old and his 3-year-old stablemate Riva Ridge, who is not mentioned in the film, won both the Kentucky Derby and the Belmont Stakes.

In 1973, when Secretariat became the first Triple Crown winner since Citation, in 1948, and was again horse of the year, Ms. Chenery, then known as Penny Tweedy, followed figures like Lucille Markey of Calumet Farm; Elizabeth Arden Graham of Maine Chance Farm; and Allaire C. duPont, owner of the champion gelding Kelso, in the limited circle of thoroughbred racing’s well-known women.

“Lucien Laurin trained and campaigned the horse, not me,” Ms. Chenery noted long afterward in recalling Secretariat’s glory years. “I discovered I had the ability to communicate with the public, though, and as the horse’s spokeswoman I suppose people began to think of horses being owned by women.”

Mr. Laurin, along with Secretariat’s jockey, Ron Turcotte, and his groom, Eddie Sweat, shared portions of the spotlight with Ms. Chenery. But it was she who developed an uncanny bond with Secretariat in the view of Randall Wallace, who directed “Secretariat” the motion picture.

“Obviously, one can romanticize it all, but I think Penny Chenery had a sense that connected her to the horse,” Mr. Wallace said when the movie was released.

Ms. Chenery dismissed the suggestion of a mystical tie. As she told The Times: “It’s a Disney movie. No, we didn’t have a spiritual connection. We had a mutual respect, but he didn’t stand still long enough for me to look in his eye and say a prayer.”

Notwithstanding the film’s feel-good touches, Secretariat’s Triple Crown year was hardly all roses for Ms. Chenery.

In the 2013 documentary “Penny & Red: The Story of Secretariat’s Owner,” produced and directed by Ms. Chenery’s son John Tweedy Jr., she revealed that she had an affair during that racing season of 1973 with Mr. Laurin, the trainer, arising, she said, from the crumbling of her marriage to John Tweedy (they would divorce late in 1973) and her feeling of isolation in facing the pressures of the time.

“It may spoil my image,” Ms. Chenery told The Lexington Herald-Leader in discussing her revelation of the affair with Mr. Laurin, who died in 2000. “I don’t know, and at this point I don’t care. It was a tremendous experience for me to go through the Secretariat years, and I just really wanted to let people know what it’s like to have a top horse and no one to turn to.”

Helen Bates Chenery was born in New Rochelle, N.Y., on Jan. 27, 1922, and grew up in nearby Pelham Manor, a daughter of Christopher T. Chenery, who made his fortune organizing public utility holding companies. She rode in shows as a youngster, developing a love for horses from her father, who took part in polo matches and fox hunts.

In 1936, Christopher Chenery bought the Meadow, a 2,600-acre property in Doswell, Va., near Richmond, that had once been his family’s estate but had fallen out of its hands after the Civil War. He developed it into a racing and breeding operation known for outstanding broodmares.

Ms. Chenery graduated from Smith College, worked for the Red Cross in Europe during World War II and was taking graduate courses in business at Columbia University when she met John Bayard Tweedy. After their marriage in 1949, they lived in Denver, where he was a lawyer and businessman. They raised four children and she engaged in charitable work.

Ms. Chenery had maintained only a limited connection with her father’s horse farm.

“I was close to my dad as a daughter to a father, but he was a man who had his own ideas,” she recalled in the book “Secretariat,” by Raymond G. Woolfe Jr. “He didn’t want a lot of help or advice. Oh, I was on the board but all I did was go to the meetings and learn what had already happened and say, ‘Aye.’”

But in the fall of 1967, when Mr. Chenery became limited by Alzheimer’s disease and his wife, Helen, died, she was designated by her brother, Hollis Chenery, and her sister, Margaret Carmichael, to take over Meadow Stable. She studied thoroughbred publications and obtained advice from Meadow’s managers and the noted horseman Arthur B. Hancock, known as Bull, of Claiborne Farm in Kentucky, determined to keep Meadow financially sound and to carry on her father’s legacy. 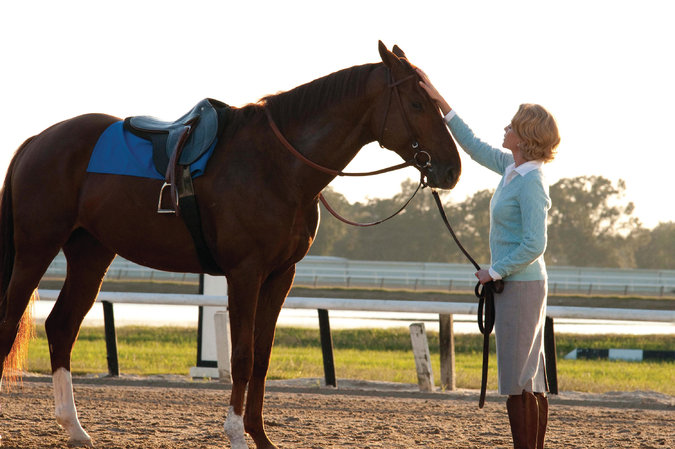 She got Secretariat after losing a coin toss with the Phipps family of Wheatley Stable as to who would have first choice of foals from two Meadow mares that had been bred to Wheatley’s renowned stallion Bold Ruler.

One of those mares was Somethingroyal, a daughter of the Chenery family’s outstanding broodmare Imperatrice. Meadow Stable wound up with the Somethingroyal-Bold Ruler foal born there on March 30, 1970, and named Secretariat by the Meadow executive Elizabeth Ham, who had worked for the old League of Nations in Geneva.

Secretariat won seven of nine races as a 2-year-old in 1972. Soon after the death of Mr. Chenery at 86 in January 1973, Secretariat was syndicated for a record $6.08 million, enabling the Chenery family to pay estate taxes. “I was determined to keep the stable operating,” Ms. Chenery once recalled.

After winning 16 of 21 starts, Secretariat was retired to stud at Claiborne Farm in Paris, Ky., in November 1973. He produced many stakes winners, though he never matched the renown of his sire, Bold Ruler, as a stallion. He holds the records for fastest times in all three Triple Crown races, garnering the Preakness record in 2012, when his time was revised downward after analysis with state-of-the-art measuring equipment.

Ms. Chenery told The Herald-Leader that her affair with Mr. Laurin ended after Secretariat was retired. “We’d run into each other at Hall of Fame ceremonies but, of course, he had a wife,” she said. “When the fever burned out, we were just good friends.”

Ms. Chenery campaigned a few horses after Secretariat was retired; she was the first woman to serve as president of the Thoroughbred Owners and Breeders Association, from 1976 to 1984, and she was an advocate for humane treatment of retired thoroughbreds. The Chenery family sold the Meadow in 1979.

Survivors include her sons, John and Chris Tweedy; her daughters, Sarah Manning and Kate Tweedy; a stepson, Jon Ringquist, from her marriage to her second husband, Lennart Ringquist, which ended in divorce; and six grandchildren.

Eddie Sweat, Secretariat’s groom, died in 1998, and Mr. Laurin died in 2000. Ron Turcotte, Secretariat’s jockey, now 76, has been paralyzed since a racing spill at Belmont Park in 1978.

Ms. Chenery continued to receive letters as well as poems and children’s drawings paying tribute to Secretariat while he stood at stud. As she put it, “What all these people are really saying is, ‘Boy, we love that horse.’”

“I’m going to miss him terribly,” she said when Secretariat died. “He was not only a champion race horse but a cherished friend.”