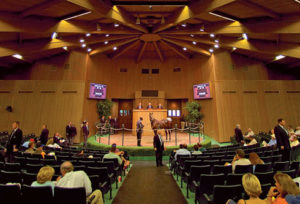 D. Wayne Lukas sounds like the vice-president of the local Colonel Sanders franchise. He is, in fact, a horse trainer, America’s best if you measure these things by money won. He was still hauling quarter horses around Oklahoma in 1977 when he bought his first thoroughbred . By 1983, he was the country’s leading trainer. Now he’s the dominant force in American Racing.

He has detractors aplenty. They say he is hard on horses, that his corporate approach has stripped the romance from the game. Well, hold up, fellers. D. Wayne Lukas is about to do something hopelessly romantic, as he does each year at this time and in this town. In the sticky heat of a Kentucky summer, Lukas is about to undergo a mystical experience understood only by himself and which, more than anything else, explains his ascendancy.

Tomorrow, the world’s most fabled yearling sale begins anew at the Keeneland pavilion here in Lexington. And Wayne Lukas will be all business, as the Americans say – striding from barn to barn, pulling out yearlings by the hundreds, staring, peering, frowning, pondering, more often disdainful than admiring, and only occasionally scribbling in his catalogue.

He doesn’t want much – just perfection. Not the breeder’s idea of perfection either, which is to say a yearling by a hot sire out of a stakes-winning mare. Lukas is a conformation man. He buys a chassis, a horse rather than a catalogue page. He cares not for fashions, crosses, dosages, or astrology. He does most of his buying at this sale and assumes that a youngster has to be well-bred to be catalogued. He grades horses on a one-to-ten conformation scale known only to him. If they fail his eye, he will not bid, no matter how fashionably the horse is bred. If they score well as types, Lukas will pay over the odds. He has some eye. Each year, he pays high prices, yet finishes in the black.

How far in the black is apparent in a new book, Lukas At Auction, published here by Joe Bagan, a horse enthusiast from Colorado who has a statistical bent that is terrifying. Bagan has looked at every yearling – some 353 – Lukas purchased between 1979 and 1988; what the horse cost, what it won, what it cost to train, what it was resold for. According to Bagan, Lukas’s account shows a profit of $37.4 million.

Since Lukas began buying large numbers here in 1979, the sale has been through three phases. Prices rose crazily as Robert Sangster and the Dubai Arabs chased the top colts. Sangster did spendidly in 1970’s, but in the 1980’s he and the Arabs bought some frightful duds. The market peaked in 1984, and phase two began. The hangover was long and terrible; over the next four years the Keeneland average fell from $544,000 to $367,000. Now we are in phase three; the market looks to be rising gently again. The arresting thing about Lukas is that he is the man for all seasons. Unlike the other, he triumphed through all phases.

Lukas bought his first thoroughbred at Keeneland in 1977, a filly by Secretariat who won him $423,896. The man who will spend tomorrow pulling out yearling after yearling was too embarrassed to inspect the filly. He waited for the others to ask for her to be led out, then sneaked a look. He did not return until 1979 when he bought badly. He took home six for an outlay of $324,000. Half them never raced; the others won about $64,000.

In 1981 Lukas bought wonderfully. This was the year the Arabs arrived at Keeneland and ruined Robert Sangster’s corner. Thirteen yearlings made a million bucks. The circus had begun; it would run until eventually the price of a top yearling had nothing to do with what it could earn on the track or at stud and everything to do with the vanity of rich men. In 1981 Sangster needed to outlay $3,5 million for the top colt, who raced at Ballydoyle for lifetime earnings of $2,118. As Bagan suggests, Belly Up might have been a better name. Sheikh Mohammed did better. He paid $3,3 million for the colt who would become Shareef Dancer and win the Irish Derby. 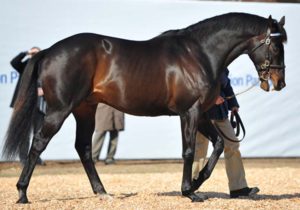 Lukas made them look like profligates. He bough twenty-one youngsters for $5,5 million. Yes, there were a couple of duds. There was also the champion 2-year-old Landaluce. At her first start, she won by 21 lengths. Lukas also bought a colt, Marfa, who went out favourite for the Kentucky Derby. As Bagan points out, 7949 yearlings went to auction in 1981. Lukas bought just .002 per cent of them, and picked a champ and the Derby favourite.

In 1983 the Arabs and the Sangster camp duelled futilously – for turkeys. As Bagan says, to the victor went the spoil – a Northern Dancer colt. For $10,2 million, Sheikh Mohammed won Snaafi Dancer, who never raced and was sterile. Bagan likens this to an event in 1937 when one Manfried Le Farge won a round-trip ticket aboard the Hindenburg. The Sheikh bought thirteen million-dollar for $34 million. The most successful of them won $287,365. Sangster and his partners bought seven million-dollar babies. One of them turned out to be the class horse Law Society; the rest were ordinary. 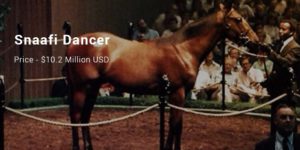 In 1984 Sangster snared the top-priced colt for $8,25 million. As Imperial Falcon, he won all of $14,299. The Arabs two top colts costs $7,1 million and $6,5 million respectively. They turned out slugs. Lukas scored again. He bought twenty-eight for $8,4 million. He picked up the classy filly Tricky Squaw, the Breeders’ Cup winner Twilight Ridge, the good colt Clear Choice, and the crack filly Life At The Top, who won a million.

In 1985, the last year of the war between Sangster and the Arabs, D. Wayne Lukas forgot his game plan and came within one bid of disaster. The top colt made $13,1 million. The record still stands; it it so absurd it could stand for decades. Robert Sangster bought the Nijinsky youngster, Lukas was the underbidder. The colt became Seattle Dancer; he won $189,000 and went to stud at a fee that bore no comfortable relationship to his sale price, and is the stuff of suicide notes. Aside from this lunacy, Lukas’s judgement was fine; he bought the Breeders’ Cup winners Capote and Sacahuista, two Oaks winners, and a couple of reasonable stakes horses. 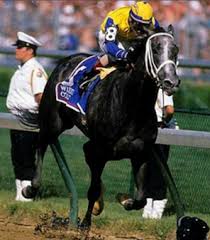 And still the Lukas Bandwagon rolls on. You wonder how Australian trainers would fare under the same microscope. But the comparison would not be fair. On the track, no less than 92 per cent of Lukas’s yearlings failed to earn their purchase price. ‘Residuals’ tipped the ledger into the black. A top colt with top form can be syndicated for tens of millions here; in Australia, that same commodity brings one to four million. Here, a superbly bred colt who fails to race up to his pedigree can always be sold for a reasonable price as a stallion to South America or Australia. There are no markets for Australia’s failures.

Lukas is famous for the corporate image he presents, for the slickness of his operation, his organisational skills and salesmanship, his belief that horses are a business. But can a creature as heroic and as perverse as a horse ever constitute a ‘business’?

Buying a yearling – anywhere – is like being shown a sleek car. You are allowed to inspect the chassis, but the trap is that the engine is in a sealed compartment. You may only guess whether it is two rubber bands or a V8. In the end, Lukas ‘business’ comes down to something as weird as his ability to divine big motors. And they say he’s taken the romance from the game?

The 1990 Keeneland sale is in its second day. D. Wayne Lukas has bought plenty. But there one filly he wants above all.

Tom Gentry plonks himself close to the front row of the sales ring to see his filly sold. His filly looks fine; Gentry, a horse breeder by trade and an exhibitionist by compulsion, looks like a blob of striped candy. He wears a purple and yellow-striped blazer straight from vaudeville, a hideous yellow tie, and a shirt that defies description – except to say that no self-respecting labrador would sleep on it.

Gentry is Kentucky’s most flamboyant citizen. Right no, he’s having a little bother in the courts – a trifle about bankruptcy – but he refuses to be coy. Entertainers at his pre-sale parties have included Bob Hope, Burt Bacharach and this year, Neil Sedaka.

Gentry’s filly, by Secretariat, and one of the best types in the sale, opens at $300,000 and quickly runs to $1 million. Tom Caldwell, the auctioneer, says the price is so good Gentry will give the purchaser his blazer as well. Despite this, the filly runs on to $2 million to the bid of Lukas. Caldwell says this price is so good, Gentry will now throw in his tie.

Lukas has been bidding unobtrusively, resting the heel of the hand on his chin and moving just one finger for the auctioneer. At the mention of the tie, he becomes agitated. He waves his hands dismissively, the classic gesture of the beaten bidder. He shouts to Caldwell he doesn’t want the filly if Gentry’s clothes come with her. The auditorium rocks with laughter.

Two bids later, Lukas gets the filly for $2,1 million. Gentry, who appears to be crying and giggling at the same time, comes hustling up the aisle to congratulate him. Happily, he makes no attempt to disrobe.

Gentry is last see falling about in his purple and yellow jacket. As dusk falls, it has attracted not a single bid.