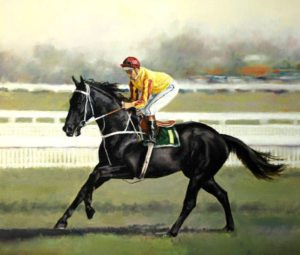 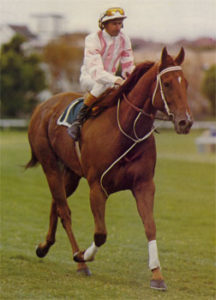 Given the racing man’s hereditary obsession with the irretrievable past and allowing for the fallibility of memory, it may prove too much for us to recreate it all as it was.

Patrick Robinson wrote that in Decade of Champions, his tribute to the great European and American horses of the 1970s. One clutches at his words for protection after Saturday at Moonee Valley. How do you recreate it? Kingston Town glided away with his third successive Cox Plate after looking worn out for most of the race. Manikato, his legs a blur of white bandages, took his stakes earnings past $1 million by winning the Moir Stakes. These things happened within forty minutes of each other. Twice the crowd slipped euphoria. Twice the whiff of immortality was in the air. How do you recreate it? Best just tell what you saw.

Kingston Town waits to be saddled. The first thing you notice about him, the thing you always notice, is that huge girth and the high wither that flows seamlessly into his back. You notice the slight dish in his face. If the King’s colours are obscured in a race, you can always pick him out by that head. He’s knocked around a little. There’s a piece out of the off ear and a ridge of scar tissue across his muzzle. His front joints are worn and the white hairs on them tell you of poultices that have been bandaged too tightly. He is relaxed. This is what Tommy Smith, his trainer, has taught him to do: come to the track, stand around unfussed for a couple of hours, then go out and win the best races. It’s nothing much. Tommy has been teaching horses to do this for forty years.

A woman is stopped as she tries to enter the mounting yard. She explains that she owns a beast called Kingston Town and that her husband, David, is over there. Helen Hains is allowed in. David Hains combs his hair. As he did last year, he looks as though he has had a joyous premonition. As he did last year, Tommy Smith wears a beatific smile, as though he knows something others don’t. The crowd gives off a nervous buzz. ‘God, I’d like to see this thing win,’ someone says as Kingston Town goes through the gate on to the track.

Kingston Town no sooner jumps from the barrier than Peter Cook’s whip is going crack, crack, crack down his shoulder. Come on, get up into the bit, you’re in a race. Not good, this. Out of the straight the first time and Cook is still trying to pick the gelding up, to get him interested. Not good. Cook scrubs his hands along the black’s neck along the back of the course. Near ‘the school’, 600 metres out, Cook’s whip is going slap, slap, slap down the shoulder again. Grosvenor, a colt running on legs that feel no pain, passes Kingston Town effortlessly. Not good. Cook gives the King a few whacks behind the saddle coming to the turn.

And then the moment comes, missed by many because they have started to hail Grosvenor as the winner. Kingston Town rolls to the outside – transformed, He lengthens stride, lets down, and finally lunges into the bit. God, he’s going to win. Cook, having stood over the horse for 2000 metres, sits quietly for the last 50. As David Hains says afterwards, the horse has lost his early speed. What he hasn’t lost is his sense of navigation. He knows where the winning post is. He knows that it is the only place that matters on a racecourse. And he has a hatred of defeat.

The King makes the transition from has-been to immortal so smartly that the crowd find its full voice only after he has crossed the line and is starting to ease down. The clapping and cheering lasts until the field has pulled up, 400 metres or so past the post.

Hains is engulfed. People shake his hands, thump his back, squeeze his elbows. He smiles and shakes his head and produces a white handkerchief. He is a shy man. He briefly lifts his hands above his head, as winners are supposed to, but the gesture doesn’t suit him. It’s as though he’s embarrassed to be so lucky. Tommy Smith’s smile is now angelic. Hains tells the crowd: ‘We’ve had the stars and I don’t think we deserved the moon – but we’ve got it.’ Cook says: ‘I’m sure glad that’s over.’ He knows it wasn’t easy as it looked.

Now Kingston Town is back in stall 95, as calm as he was before the race. A huddle of spectators watches silently in the warm sun as a farrier replates the black. Manikato and Rancher pass his stall, saddled up and on their way to the track for the Moir Stakes. Rancher, the hot young sprinter, is going to play Grosvenor to old Manikato. Like the King, Manikato has been around a long time and his legs hurt.

The barriers open and Rancher rushes towards the lead, his mouth open. He’s fired up, going too hard. Manikato isn’t. Gary Willetts, his jockey is playing the predator. He’s sitting one out and one back, waiting. He tackles Rancher at the top of the straight and the crowd roars. Everyone knows what Manikato is going to do to Rancher. Rancher is pretty; Manikato is a killer. Ears laid back, he breaks Rancher’s heart in the straight. Quickly, clinically.

Mal Seccull, Manikato’s owner, is rushed by well-wishers. Bob Hoysted, the gelding’s trainer, stands nearby, flushed and glowing. Manikato, hot and cranky, nostrils flaring and winking pink, tries to walk through his strappers. He’s never been sociable and Moonee Valley has become a mardi gras.

He settles down when he is led back to his stall and the rituals begin. Hoysted bandages plastic shopping bags filled with ice on to Manikato’s forelegs so that, when it’s done, the legs look deformed. A yellow towel lies over the horse’s loins. A crowd gathers. ‘Isn’t he lovely,’ a woman says. He isn’t lovely, never was. He’s just game, hopelessly, hopelessly game, and his legs hurt. Shilo, his pony mate, is next door. Shilo licks Manikato on the shoulder. Shilo is the only other horse Manikato has any time for.

A few stalls down the shed row, Rancher stands, still blowing. Charlie Waymouth, his trainer, has a hand on the stallion’s girth just behind the elbow and stares at his whistwatch. He’s taking Rancher’s pulse. Waymouth then strokes Rancher gently on the neck and, grim-faced, takes a long drag on a cigarette. There are losers too.